On the 9th Day of Christmas … from 52Teas

This isn’t the only “12 Days” type of thing that I’ve chosen to become involved with this holiday season.  I am also in a 12 Days of Christmas art swap through a Yahoo! art group that I’m in.  You can learn more about that swap here and see some of the art pieces that I’ve received in that swap, as well as the art piece that I made for the swap.

Both of these 12 Days “thingies” have been a lot of fun for me … and there is a part of me that is just a little sad that they are both almost over.

But rather than think about when it will end… I think it is much better to focus on the here and now.  And right here and now, it is time to unveil the tea of the day for today! 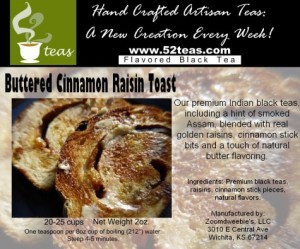 So, a raisin flavored tea is pretty unique in and of itself; cinnamon-raisin tea: a bit cooler, but at 52teas, we don’t just push the envelope, we shove. So, I’m happy to present our tea of the week for the week of January 4, 2010: Buttered Cinnamon Raisin Toast flavored black tea.

We started with our premium Indian black teas base, added just a touch of smoked Assam teas for a tiny bit of toastiness, then we added real golden raisins, cinnamon stick bits and natural raisin and cinnamon flavors. We topped it all off with just a hint of natural butter flavoring. The result: Well, you will have to try it to believe it.

I was a little surprised to find this tea in this 12 Teas of Christmas box.  Pleasantly surprised, but surprised nonetheless; mostly because this tea is not one of 52Teas permanent collection teas.

However, I think it SHOULD be in their permanent collection, because it is so good.  I tried this tea when it was first introduced (and you can read my first review of this tea here), I mean, how could I resist?  It just sounded too unusual and interesting to pass up.

One thing that I did say in the previous review that remains true today – this is definitely one of 52Teas most interesting blends!  I am so happy that I got to revisit it!