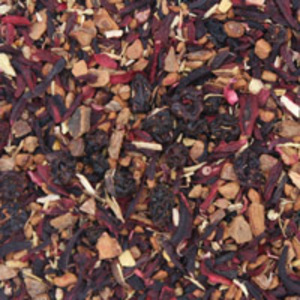 Where To Buy: American Tea Room

Dry Cinna*Plum Tea from American Tea Room smells like Plum and Cinnamon and MAYBE a little licorice – but not too much licorice to the nose.

When I finished infusing this – I saw the color and freaked because I assumed it had Hibiscus in it…BUT…it doesn’t!   I give this Extra Points for that on my personal preference meter, indeed!

This was quite smoother than I thought it would be. Don’t get me wrong – I am thankful for that – as I am not overly fond of intense tarty or fruity teas and tisanes, usually!

I could taste Plum and maybe the currants, too…they’re very wine-like.  The cinnamon isn’t an intense cinnamon type taste – I can smell it more than taste it…and the licorice is pretty much the same way…together they knock down the tartiness of the fruit and it works out VERY nice!!!  This is very warming and comforting and fruity and fun but not overly tart and I like that.

Eventho American Tea Room markets this as their Holiday Tea for 2010 – I think it would be lovely iced, as well!